I have a book signing coming up on Monday, August 5th at the local library. I have to say, I’m pretty excited about it. The signing is for my book, The Shadow, the first book in The Darkness Trilogy.

I wanted you all to know that I do talk a lot about my book on my blog, but I also talk about it on my YouTube channel. If you’re a YouTuber/BookTuber then here are the videos I have done so far on my book.

1. Who is Rayna Stone? http://youtu.be/ni1fEULvvSI

2. Who is Liam Cole? http://youtu.be/EKOUQCoNqVw

3. Who is Jayce Rollins? http://youtu.be/zYQBWt4iqos

In these videos I talk about each character. If you haven’t read the book, don’t worry, I don’t give any spoilers away.

As most of you know I love to write. Currently, I have my first book, The Shadow, out in publication. I am in the middle of edits for the second book. If you have ever edited a book you know it requires a lot of work, fearlessness and caffeine! My mind is so wrapped up in it that I feel like I need a release. I relieve stress by…writing! So, while I have been editing, I have started on another book. Haha! I have a sample chapter that I would love for you all to read. Let me know what you think. If you like it, go vote for me here:
https://www.jukepopserials.com/home/read/897
Before you get into it, here is the synopsis:
*Note: This is work is (c) A.G. Porter

Tarin King never wanted to leave her loving home in Maine. She never wanted to impose on her aging grandfather or have to share living space with his “adopted” son, the creepy and socially-awkward, Rylan. She also didn’t want to start a new school during her senior year. However, things haven’t exactly gone the way she wanted them to since her parents died in a plane crash, the same crash that nearly took her own life.

Her grandfather, while a sweet man, treats her as if she might break, Rylan treats her like she’s something to study and the kids at school avoid her like the plague. When she meets Dalton, a witty and handsome loner, Tarin thinks her social life just might be on the mend.

Still, there are things that Tarin must keep to herself. She doesn’t tell her new friend, or anyone else for that matter, that she’s seeing things. She doesn’t tell her grandfather that shadows dance in the vineyard of his Tennessee farm. She especially doesn’t tell anyone about the terrible headaches that cause her to lose time. She’s afraid of what happens during these blackouts; she’s terrified of finding out where she goes. Every time they happen, she comes back with cuts, bruises and sometimes items that she knows belong to someone else.

Words are words, but more is heard when more is learned.

Words are words, but more is torn when more is ignored.

Words are words, but more is known when more is shown.

Words are words, but the more it bares the more we care.

I wanted to share an article with you. This was written by Mr. Greg Parker with The Madison Record in Alabama. Greg took the time to ask me a few questions about my book, my inspirations and who I am. I wanted to share this with and would love to know what you think! I’m pretty excited about this as it is my first interview!

Have a great day!

It has been far too long since I’ve written a post. There has been some crazy stuff going on lately. For starters, my laptop’s harddrive crashed! I’m using my husband’s computer to write this post. I’ve had my Mac for less than a year and already it’s toast. Things like that make me go “Ugh!”,know what I  mean? Anyway, I’ll put all the negativity to side. I have to focus! My focus has been so off. I think it’s because I’ve been trying to do too many things at one time.

I have a book signing coming up! Yay! It’s in my adopted home town of New Hope, AL. Yes, the same town my main character, Rayna, is from in The Shadow. I love this little town and the people in it. I’m especially glad that I found a church that can now call my home church. It has been great getting to know the members of the church to be a part of the Children’s Church Ministries. Kids are so much fun!  I love being around all the energy and happiness. They just put a smile on my face and it warms my heart knowing they have a desire to know God.

This past week a few kids came to our July program Terrific Tuesdays. They learned about the parable Jesus taught of The Good Samaritan and then became Good Samaritans by making cards for the elderly at the local Nursing Home. They had so much fun and made some really cute cards. Check them out: 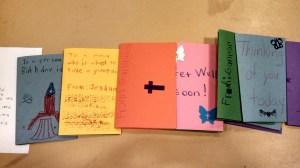 I started back to classes last week as well. It just so happens that my computer crashed the night of a homework assignment being due. I stressed, but it was all for naught since I just used my hubby’s computer. He’s good for something after all. 😉 That was joke. My hubby is a good one! I’m just hoping that the Apple people can retrieve some of the stuff on my hard drive. Like, all of my homework assignments! Ok, not stressing! 🙂

Duncan has to spend the summer enduring his mother’s jerk of a boyfriend, Trent, all the while going through that awkward moment in life; that moment when we aren’t sure where we fit in or if we even do.

He soon makes friends with the owner of Wizz Water Park, Owen (Sam Rockwell, Iron Man 2) when he ends up there to escape the claustrophobia that comes along with family. He is also hired to tend to odd jobs, which is mother is clueless about. This friendship is therapeutic to Duncan as Owen seems to be the only adult or person that Duncan can relate to. While there, Duncan learns who he is and begins to open up; he begins to grow up.

The film is from Fox Searchlight Films also produced Little Miss Sunshine, which happened to start both Toni Collette and Steve Carell. Nate Faxon and Jim Rash wrote and directed The Way, Way Back as well as played water park staff members, Roddy and Lewis. Both artists, along with Alexander Payne, wrote the script for The Descendants, based on the novel by Kaui Hart Hemmings.

The young and talented AnnaSophia Robb (Soul Surfer) is Duncan’s summer crush. Allison Janney (The Help) plays the zany next-door-neighbor who shares too much information. Also, Rob Corddy (Warm Bodies) and Amanda Peet (2012) are Trent’s friends who join the family on their vacation. Maya Rudolph (Bridesmaids) rounds out the cast as the sassy water park worker.

Carell has been in the spotlight for his role as the “bad guy.” He is insulting to Duncan, constantly cutting him down. Carell is known for his humorous roles in films such as, Anchor Man, 40-Year-Old Virgin and the television hit The Office. To see him take on a role that goes against character is refreshing.

The Way, Way Back is in theaters now.

I’m excited to announce that I have received my first ever Book Blogger Review. I have put the link below for you to read for yourself, but first, I have a few things to say. First off, Book Bloggers rock! These ladies and gentlemen spend countless hours reading and reviewing books. They don’t do it for money or for notoriety; they just love books! They also love authors! These guys serve authors and readers selflessly and for that, I want to say thank you! Also, I envy the fact that all of you can read that fast!

So, here is the link. While you’re there please check out the other reviews by Eboni at The Serial Reader.

Thank you, Eboni! I appreciate your time and dedication to my book!

The Lone Ranger (PG-13) is a modern day, fast action, fist flying, train-chasing version of the classic Radio Serial hit. Armie Hammer (Mirror Mirror) is the new face of the mask-wearing hero, John Reid aka The Lone Ranger. After being transformed, seemingly brought back from the dead, by an outcast Comanche Warrior, Reid and his new Native American ally, Tonto (Johnny Depp, Dark Shadows) join forces to bring justice to a Texas town where the lawmen are just as corrupt as the bandits.

The Lone Ranger and Despicable Me 2

The film is directed by Gore Verbinski, who has directed several other Johnny Depp films, such as the Pirates of the Caribbean Franchise and the animated film Rango.

Despicable Me 2 (PG) Steve Carell is back as Gru, the villain with a heart. When the world is in dire need of a superhero, the AVL (Anti-Villain League) calls on none other then the criminal mastermind himself. Why? Because to beat a villain, you have to think like a villain. Gru is partnered up with Agent Lucy Wilde (Kristen Wig, Bridesmaids) and his daughters Margo (Miranda Cosgrove, iCarly), Edith (Dana Gaier, Despicable Me) and Agnes (Vertical) are determined to get the two together.

Also featuring the voices of Benjamin Bratt (Snitch) as the villainous El Macho, Russell Brand (Rock of Ages), Ken Jeong (The Hangover), Steve Coogan (The Other Guys), Nasim Pedrad (Saturday Night Live) and last but not least, the men behind the voices of the adorable minions, Mr. Pierre Coffin and Mr. Chris Renaud, who are also the film’s Directors.